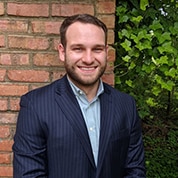 Bryce attended University of The Cumberlands where he obtained his Bachelor’s Degree in Political Science with a Minor in Criminal Justice. He received his Juris Doctorate from John Marshall School of Law. During his time in college, Bryce played football and was involved in community charities. He was a member of the mock trial team that competed in Washington, D.C. during his time at John Marshall.

Before joining Thomas & Brown, Bryce worked as a Clerk for an Atlanta law firm and advocated for their clients. He became interested in real estate law and worked with us as he completed his law degree. Now he looks forward to successfully closing our clients and being an important part of one of the biggest transactions of their lives!

During his free time, Bryce enjoys watching football, playing golf, and getting together with family and friends. Bryce and his wife have two adorable dogs and they love spending time taking them on walks.

No attorney-client relationship is established by contacting the firm.
No confidential information should be sent via the internet in an unsecure manner. Most email services are not secure.
​Our website provides a secure portal to upload documents for delivery to our company.